I want to give you my go-to strategy (proven in multiple million-dollar campaigns)
so you can spend more time connecting with your people and less time planning.

Want my proven list growth strategy? Let me show you my recipe for a simple opt-in funnel that will put you on the fast path to money. It's all in my FREE PDF: PERMISSION TO KEEP IT SIMPLE

My name is Angie.

My specialty is direct response marketing, and in the last decade my work has made over $30 million in sales. I’ve done work with names you might recognize – including Lowe’s, Masterclass, Kevin Rogers (founder of Copy Chief), and Jeff Walker (creator of Product Launch Formula).

I’ve seen behind the scenes of just about every kind of sale or promotion you can think of, from a multi-channel coast-to-coast media blitz... to marketing live events that routinely bring in a thousand people from around the world.

Don’t get me wrong - a lot of the promotions I worked on were complicated. Any time the words “multi-channel” or “omni-channel” get thrown around, there’s complexity... and that’s because there are a lot of moving parts when you’re dealing in radio, TV, print ads, direct mail, email, and web.

But over time, I started seeing patterns. The winning promotions all had a certain simple underlying structure, with a message that was compelling and easy to follow.

I became obsessed with seeing just how simple I could get while still bringing in massive amounts of sales... so I started experimenting.

One of those experiments was an “abandon cart” email campaign to get people to complete a purchase they’d started but never finished.

The kicker? Those three emails combined had maybe 200 words total. Simple. And now that campaign runs at the tail end of every promo - adding multiple 6 figures to the company bottom line.

Another experiment was a re-engagement campaign to people who’d stopped opening emails. We sent 3 emails to try and convince them to come back to our brick-and-mortar stores... generating a mind-blowing $8.4 million in additional revenue. Again... short and super simple.

Seeing those results changed everything about how I concept and create a sales promotion. Now I always start simple... because it works.

How simple? Well, there are four main steps in a bare bones funnel.

And when you follow them, you’re on the fast path to money.

Grab your favorite adult beverage and check out my blog:

I'm currently in the middle of taking a podcast workshop from Seth Godin. For years now, especially after I'd speak on stage...
LEARN MORE ...

Here's an observation - especially in today's world of frayed nerves and insta-snark kneejerk replies at anyone who's even perceived at being...
LEARN MORE ...

I have a confession to make: Tech and I don't get along. Unless it's super intuitive and gettable-at-a-glance, I tend to give...
LEARN MORE ...

being watched while you sleep (marketing adjacent)

Do you ever go through your own sales or marketing process? I mean, as if you were a customer? Do you make...
LEARN MORE ...

Today I had an ambitious up-and-coming copywriter reach out to me via private message. Normally I would leave this kind of convo...
LEARN MORE ...

stepping into someone’s head as a copywriter

This week I got a question: When you're writing copy, how do you find the balance between being true to the company's...
LEARN MORE ... 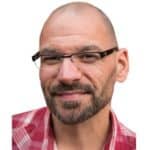 Angie Colee is one of the writers I trust most to deliver the goods.  She has a killer creative instinct mixed with years of real world experience crafting, testing and optimizing marketing campaigns. She's a natural leader who understands the importance of a deadline. Angie gets my highest recommendation.

Here Are A Few Ways I Can Help With Your Next Marketing
Or Sales Promo:

Check Out My Favorite

Need a Loving Kick in the Pants?

Want My Eyes On Your Copy?

Learn More ...
Do NOT follow this link or you will be banned from the site!